What To Shoot For Stock: A "Senior" Image Corny, but eye catching, this stock photo illustrates concepts of security and safety for seniors.
What To Shoot For Stock Photography Collections
When trying to determine what to shoot for your stock collections, it isn’t a bad idea to try and anticipate what images are going to be needed in the near future. The further out you try to anticipate the greater the chances you will miss, yet if you don’t push the envelope enough your imagery will fall into that great morass of middle ground where its chances of standing out enough to succeed will be all too small. Another strategy is to try and come up with unique, but obviously useful imagery for concepts that are important in significant segments of the market, concepts that are both current and timeless.

The Needs Of Seniors
One such category of opportunity is found in the needs of seniors. Our “mature” population is burgeoning, and is faced with tremendous challenges on all fronts, from medical costs to health issues to insurance needs and even to the proliferation of scams that the ongoing transition from the world our seniors knew to the new digital age that is engulfing us all, is proving fertile ground for. It was with all the threats that face our seniors (ahem, guess that includes me…), that I came up with the idea of creating an image illustrating the concepts of safety and security, applied to seniors, and doing so in a way that could capture a viewer’s attention.

A Senior Woman Knitting...With A Twist
In my last photo shoot I included an image of a senior woman knitting...for which I planned a "twist". I didn’t spend a lot of time on the shot, just had her sit on an office chair with a basic lighting set up and fired off a dozen frames or so. As she had white hair, and was against a white background, I had my partner Stephanie hold up a blue yoga matt behind her head (hey, it was handy), to allow for an easier job in stripping out her hair. I actually don’t know if that was the best way to go about in dealing with the hair…but it worked. 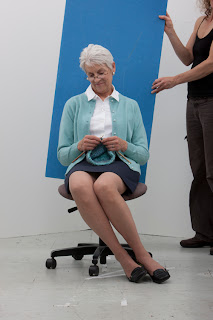 A quick shot of a mature woman knitting to be stripped out and composited with a Lion, in a penthouse.

A Lion And A Buenos Aires Penthouse
In my archive I retrieved an image of a Lion I had photographed in my studio years ago, and a photo of a couch shot in a Buenos Aires penthouse.  It took me a couple of hours with Photoshop to combine the elements into what I believe is a visually compelling picture that shows a happy senior relaxing in the pursuit of her interests and secure in the knowledge that she has a potent advocate, a protector or guardian, if you will, that few would want to “mess” with.

Corny…But Fun!
Okay, a bit corny…but fun nonetheless. Having her knitting actually adds to the humor and makes it clear that she represents the “retired” community. She is in an upscale environment that is important in representing her as successful and in control. The lion at her feet is alert and vigilant…a powerful symbol of strength and protection. This image is ambiguous enough to apply to a wide range of services and products for seniors, yet is unequivocal in its positive message of strength and security on the behalf of seniors.

Rights Managed, Royalty Free And Old Paradigms
The image is a bit on the sparse side, but is a quick read even at thumbnail size. I crafted it so that it can be cropped as a vertical for a magazine cover, or horizontal for a spread, or even a square. I think this image would do well as either an RF or RM image. I chose RM because (I will be honest here) of my natural bias for Rights Managed images. It might do better as an RF image because of the larger pool of people willing to use RF images. But hey, I get a higher percentage with RM, and I do have the excuse of having a fair amount of “post” work and having the King of Beasts included, something that did, after all, cost me a considerable penny back when I rented him. Still, I may will be guilty here of a classic case of clinging to old paradigms. Oh Well….

Labels: Before And After, Seniors, Shooting For Stock